Vesica Blog - Taking museum and art collections to the cloud

What would you save? Museums or Libraries?

At our last Museum Professionals MeetUp in London, an interesting question not only sparked a great discussion, but it has inspired me to share some thoughts – many of those based on our discussion. The question, in effect was:

“With government funding cuts across the UK, many libraries and museums are already closing their doors. What would you like to save, your local library or museum?”

The more project managers, curators and consultants I meet from the museum industry, the more I think that museums need guidance on how to maximize the money they spend. Just like big business has learnt to adopt cost efficient technologies and processes, museums must do the same. In addition to aiming for increased spending, museums MUST, in these difficult times, also look for ways to reduce existing expenditure.

The trouble is, neither museums nor libraries do that – the results, at least, are not visible in the UK. I’ve often also felt the same, self-destructive sentiment from museum and library employees:

“We’re already paid so little for what we do, so we don’t feel the need to drive change or change the way we work – we’d rather see the institution shut down.”

Whilst that is a paraphrase of the same sentiment from multiple individuals, it is a disturbing thought. Many of these people claim to have joined museums and libraries because of their love and passion for the arts and literary work, so this sentiment is disturbing at best.

Many museums, both large and small, can save hundreds of thousands of pounds each year by simply streamlining their processes, removing bureaucracy, spending money where it should be spent and utilising technology effectively. Management consulting has a saying: “Expensive is almost always cheaper” – and it is, in the long run. Museum employees have this attitude because of their years of volunteering – museums have this attitude because they don’t know anything other than volunteering!

I believe that we can save both our museums and our libraries. In fact, if the government and libraries put their head together (and maybe spoke to me or one of my colleagues, for instance), I don’t see any reason why libraries can’t compete with Amazon and why museums need to waste more money in times when museum revenues are falling.

Further to the email some of our users would have received, we will this week start rolling out the Interactive Timeline to several accounts, with others to follow in the next week or so.

The Interactive Timeline Feature is another way to visualize and interact with your collection on a timeline and map. Whilst you will see a simplified but functional version of the timeline in your Vesica Dashboard, in the future there will be a more visitor interactive version of the timeline deployed on all Vesica galleries with a view to making the galleries a more engaging, interactive and educational tool for museums.

The Interactive Timeline in Vesica is inspired by the Helibrunn Timeline developed by the Metropolitan Museum in New York.

Using the Timeline is easy – you simply select the appropriate period and the map reloads. Hovering over each region will show you the number and types of objects available from that period in the region. Clicking on any of the displayed results will bring up details of the objects.

We’ll be publishing more details on the planned enhancement of the Vesica Timeline in the near future – in the mean time, here is a screenshot of what many of you will start seeing in your Dashboard under the “Charts” link on the menu. 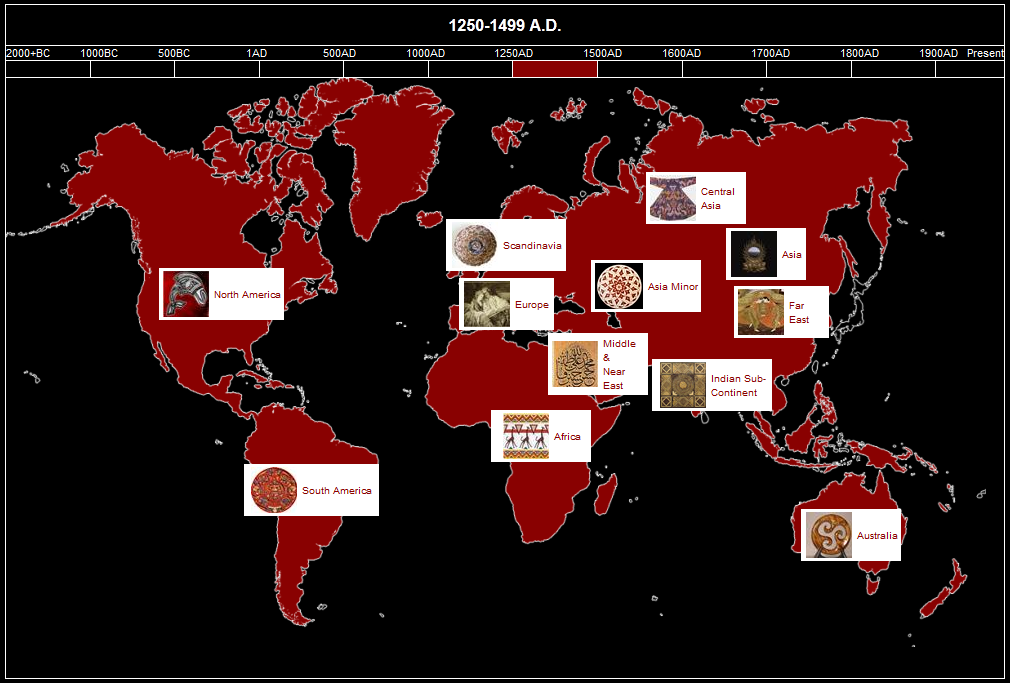 Continuing the educational pursuit of traditional arts, we will be offering the 2 following short courses next month (October, 2011) in London, UK.

We’ve just released the schedule for our Summer courses and workshops in 2011.

The following 2 courses will be offered in June / July:

For more details or to book please visit https://vesica.ws/education/.